skip to main | skip to sidebar

Something struck me while looking at one of the pictures of Melissa McEwan's hero, Hillary Clinton, in the post I linked to in my previous. 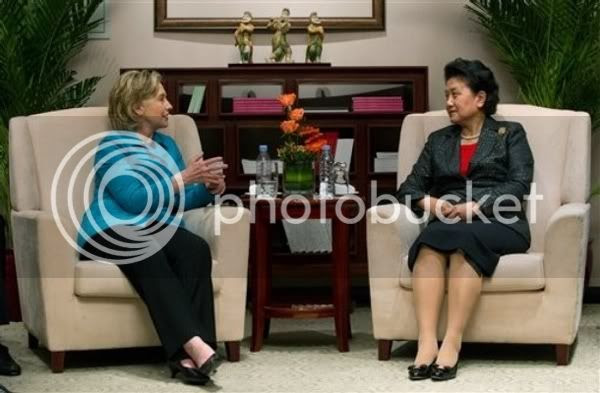 You frequently see shots of our fearless leaders in settings like these. Two awkwardly large chairs pointed towards the cameras, the subjects of the photographs sitting awkwardly half facing the cameras, half facing each other, twisted in what looks like massively uncomfortable positions, leaning in to one another to attempt to bridge the awkwardly large distance between them as they talk, legs dangling uncomfortably, never knowing whether to cross or stay feet planted on the floor.

One: It reminds me of the awkward posing of televised sketch comedy.

Two: Is there any question this is anything but theater?

Three: Maybe at the very least sitting in these positions gives these people terrible back pain, which would totally make up for all the killing and everything.
Posted by Ethan at 11:05 AM

Richard (Amleft) recently posted on tokenism - and I think it might help to understand it in terms of theater.

Secretary Clinton is a token (or totem) who "attracts" loyalists by her possession of "ennobling traits," as well an everyday state murderer.

She - like the Prez - presents the visual image of an oppressed category that has overcome institutional bias to ascend to great power. She's the sign of redemption.

Like Kagan, or the current theater unfolding around DADT (with a whole group of people as totem stand ins. The are tokens, images in the state's assimilationist marketing campaign). Or Sotomayor.

We have national myths, I believe. And they resemble, to some extent, those which adhere to Native Americans. Oppressed peoples are cast as noble savage victims, civilized by access and merit - redeeming society by their ascension, by their inclusion in the meritocracy.

So long as these totemized people behave (don't act like poor people with nothing to lose, urban blacks, thickly accented Hispanics, AIM agitators, uncompromising flamers, butches, et cetera) they do get incredible access to power and its perks.

And by doing so, give tremendous faux-moral cover to the exploitation, murder and oppression that is the feed fuel of the liberal capitalist state, and the society it governs.

Or I could just be wrong.

Ethan's working through his music collection in alphabetical order

The next five artists he'll be listening to:

Thoughts that aren't getting whole posts

Nice place you got there

http://wikileaks.antiwar.com/ is designed to redirect to the best available mirror for your area.